River Street Plaza is a $28 million development on the banks of the Fox River in Aurora, which is one of three Illinois cities expected to benefit from tax incentives under a River Edge Redevelopment Initiative passed by the state legislature. Krusinski Construction Company completed the first building in the complex, a four-story, mixed-use structure offering 48 condominiums and eight retail units.

Backed by the river, the site offered limited access or room for maneuvering. A compressed construction schedule meant that numerous crews would have to work on the project at the same time. In the latter stages, more than 100 people, representing 15 to 20 different trades — each with its own equipment and materials, would work cheek by jowl. Keeping the drywallers from bumping into the painters, carpet installers and patio finishers, while juggling the electricians, plumbers and HVAC workers with the roofers, proved to be a challenge.

Krusinski Construction Company initiated a meticulous site logistics plan. Every day, the project management team would look at the work to be done on the following day and schedule when materials could be delivered, where they could be stored and which crew could work on what part of the building. In the morning, the superintendent directed traffic – allowing every trade to enter the site according to a fixed schedule. At the end of the day, the last crew in was the first crew out.

The 390,000-square-foot concrete building with brick façade was completed in 12 months on schedule. 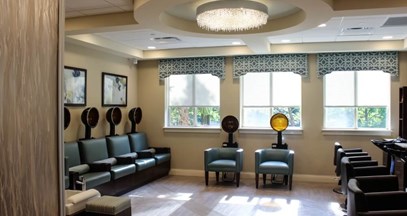