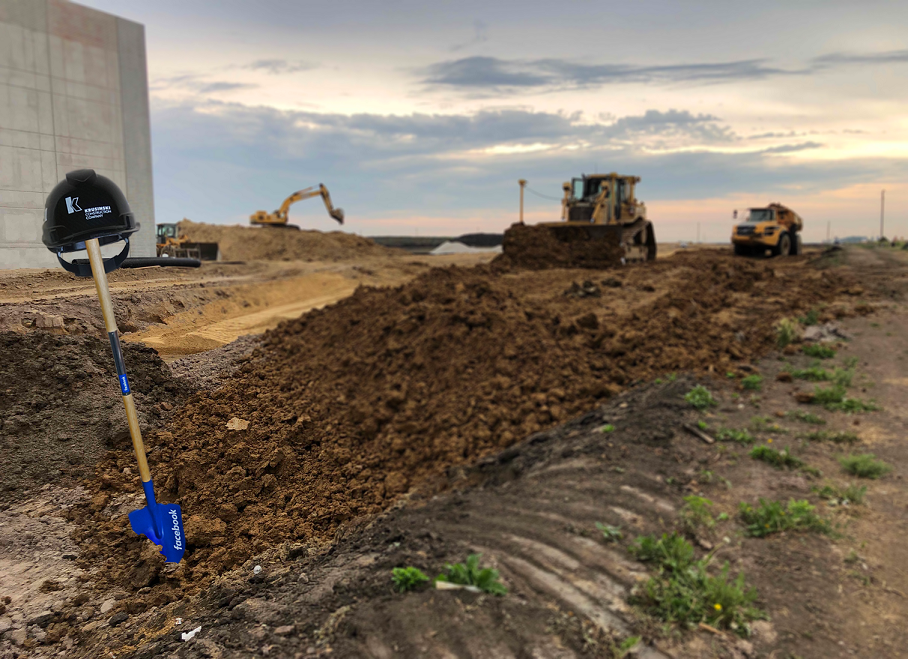 As a construction company, it’s amazing that we were one of the driving forces behind bringing a major new project to the state of Illinois. But it’s true. Facebook’s announcement that it will invest $800 million to build a 907,000-square foot data center on 505 acres at the ChicagoWest Business Center in DeKalb, Illinois was, in part, the culmination of a dream that began 14 years ago. Facebook was only two years old then. Looking back, I doubt that our Chairman, Joe Krusinski, or I had even heard about Facebook at that point. Even if we had, I doubt we would have imagined they would grow into an $700 billion business requiring a massive data center on that property

In the years leading up to 2006, Krusinski Construction Company was building distribution centers and other industrial facilities in the DeKalb area. As we worked in the region, it became clear to us that the land around DeKalb had huge potential to be used for data centers and other industrial projects. The area just south of I-88 offered transmission-voltage electrical power, abundant water supply, essential sanitary capacity, multiple broadband carriers, easy access to interstate transportation and accessible utilities. With Northern Illinois University and Kishwaukee College nearby, and the location being “not too close and not too far” from Chicago, there were also lots of other resources and a ready workforce.

We began assembling the land for what would ultimately become the 1,000-acre ChicagoWest Business Center. The site we purchased was also at the convergence of significant electrical power, transmission and distribution voltages, critical resources for a data center and other industrial projects. We expected that 50 acres could be ideal for a technology park data center – a “park within a park.”

It wasn’t all smooth sailing from our initial acquisition of some of the property until the Facebook announcement. Honestly, there were times when I thought our vision of building a data center at the ChicagoWest Business Center might never come to pass, and so did many others. The 2008 economic crash, and “Great Recession” that followed, slowed interest in such opportunities. Even after the economy began to recover, we were still faced with the challenge of competing with neighboring states that were more “business-friendly” than Illinois.

Many individuals on the Krusinski Construction Company team worked hard over the years to respond to numerous Request For Proposals (RFP). We were a finalist for a major data center project in 2013, but that project, like many others, landed up the road in Iowa. We also lost the Toyota/Mazda plant project, which is now under construction in Huntsville, Alabama. Over the years, each of the numerous RFPs the Krusinski Construction Company team responded to were built in another state. Each of those states offered business incentives that Illinois lacked.

Changing the dynamic to make Illinois, DeKalb and the ChicagoWest Business Center more competitive with other states took a lot of work. Working together, countless individuals, organizations and government entities took on the numerous challenges to make this project work.

The combined efforts of the many people and organizations resulted in the pieces finally falling into place to make the Facebook announcement possible. The announcement that Facebook will make this huge investment and bring 100 operational jobs and more than 1,000 construction jobs to our area is beyond exciting. For Krusinski Construction Company, we will be constructing critical infrastructure including the roadways, water and sanitation systems to help ready the area for the new data center.

We are grateful to the Illinois Department of Commerce and Economic Opportunity, the Illinois Chamber of Commerce, ComEd, the City of DeKalb and numerous elected representatives, government officials, governing bodies and utilities for their help in making ChicagoWest Business Center a reality. Entities like the Kishwaukee Water Reclamation District, local taxing bodies, townships, schoolboards, Kishwaukee College, Northern Illinois University, the business community and others that all played key roles.

I especially want to acknowledge the work of DeKalb Mayor Jerry Smith, DeKalb City Manager Bill Nicklas and DeKalb County Economic Development Corporation Executive Director Paul Borek. Most importantly, I want to acknowledge and thank all of the employees at Krusinski Construction Company, including our Founder and Chairman, Joe Krusinski, for their faith in this project and the hard work they put in to make this happen.

Back in 2010, when we were actively marketing the site to Mission Critical Data Center users, we anticipated such a project would need 50 acres. It turns out, we were off by one zero. When Facebook came to us, they were looking for 500 acres! Ultimately purchasing 505 total acres for the Facebook Data Center.

By every measure, this is a big project. We are glad to have played a key role in bringing this massive project to Illinois. For a construction company, it was a once-in-a-lifetime opportunity. It required a tremendous amount of work by scores of people and we are proud to have been part of this effort.

Krusinski Construction Company has under construction:
• More than two miles of Class II roadway improvements including a truck-rated roundabout and a four-way signalized intersection
• Approximately 3 miles of 16-inch water main
• Approximately 1.5 miles of deep gravity trunk sewer with capacity in excess of 4 million gallons per day