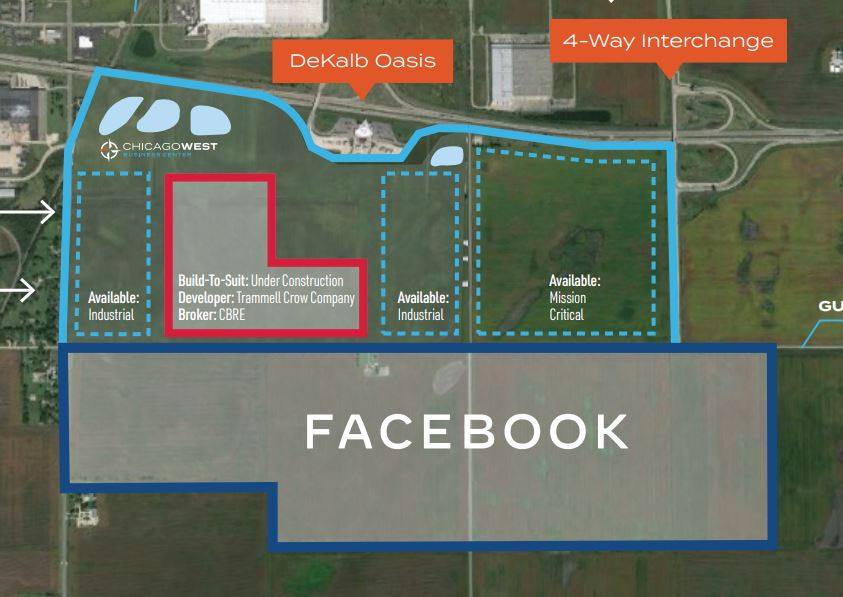 Last week, social media giant Facebook announced that it will build an $800 million data center in DeKalb, Illinois. This was a huge win for the state, which has often seen these types of projects land in other locations. What was different this time around?

Beginning 14 years ago, an LLC related to Krusinski Construction Company (KCC) began acquiring farmland nearly 60 due miles west of downtown Chicago in DeKalb County. KCC was building industrial facilities in the area at the time and this assemblage—now marketed as the ChicagoWest Business Center—seemed like an ideal site for industrial facilities, including a data center.

“We felt that DeKalb was in the path of progress, with a convergence of very strong utility infrastructure as well as the nearby university,” said Jerry Krusinski, CEO of Krusinski Construction Company. “I’ve often used the expression that it’s not too far and not too close to Chicago.”

Krusinski was instrumental in the annexation of the land into the city of DeKalb and he worked with industry organizations, governments, public-private partnerships and others to bring new infrastructure to the site, including high-power electricity, water and access to fiber optics. All of this work was to better position the 1,000-acre, master-planned property for a ground-up industrial use.

The first hurdle standing in the way of development was the economic crash of 2008. During the record-long cycle that followed, KCC responded to a number of RFPs, but those projects always ended up going to more business-friendly states. For example, the ChicagoWest Business Center was a finalist for a data center project in 2013 that ultimately settled in Iowa.

“We were maybe a little overly selective,” said Krusinski. “We wanted the right first user because that almost sets the die for the balance of development. We’ve had multiple requests for smaller projects, but we were really more interested in a first transaction on a larger scale.”

That finally occurred this year (ironically, just as the economy heads toward another recession), with the announcement that Facebook has chosen the site for its 12th U.S. data center and the first in Illinois. The 907,000-square-foot facility is scheduled for completion in 2022.

There’s a rule of thumb in the world of computing, Moore’s Law, that states that affordable processing power will double, on average, about every 18 months. This theorem has held surprisingly true since the 1970s as all of our computing devices have gotten smaller, faster and cheaper.

Paradoxically, data centers have grown in size during this time, bursting out of siloed server rooms and occupying acres of purpose-built, climate-controlled space. How can both be true? The answer is data, or rather, the sheer amount of it that we create. Email and social media have seen exponential growth, smartphones have proliferated the means to both consume and create data and the internet of things (IoT) is connecting more and more devices every day to the cloud.

When he helped to assemble the land 14 years ago, Krusinski felt sure that a portion of the site would be a suitable locale for a data center. He couldn’t have foreseen just how massive of a use it would have been, with Facebook committing to fully half of the property’s total land area.

“Back then, we earmarked 50 acres as the appropriate size allocation, thinking that would be plenty of space for a data center,” Krusinski said. “We were off by a zero because Facebook is on 500 acres now. These data center operations are becoming so large in scale because of cloud users.”

Facebook’s DeKalb facility will run entirely on renewable energy and use up to 80 percent less water than other data centers. When completed, the facility will be LEED Gold certified. KCC is now underway with its responsibilities of readying the roads and critical infrastructure for the project.

The other half of the site—an additional 500 acres north of Gurler Road and abutting I-88, sits ready and waiting for future industrial uses. Trammell Crowe Company is currently building a portion of the ChicagoWest Business Center to suit an undisclosed user. Krusinski said he is eager to partner with Trammell Crow Company in the future to develop the rest of the land.

Facebook, which was only two years old at the time, had fewer than 100 million active users when Krusinski began assembling this land. That may seem like a lot, but it pales against the 2.6 billion users on the site today.

Cisco’s annual Global Cloud Index—which forecasts data center growth and cloud-based traffic—indicates that nearly two-thirds of the global population will be internet users by 2023, up from just over half in 2018. All of these users, consuming and generating an ever-expanding volume of data, will create untold demand for more cloud storage. It’s clear that hyperscale data centers are a certified asset class all their own.